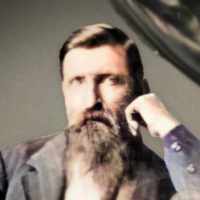 When Horace Russell was born on 10 March 1831, in Shelby, Macomb, Michigan, United States, his father, Jonathan Russell, was 47 and his mother, Nancy Wilson, was 45. He married Lydia Ann Hobson on 2 May 1856, in Endowment House, Salt Lake City, Salt Lake, Utah, United States. They were the parents of at least 6 sons and 3 daughters. He lived in Nauvoo, Hancock, Illinois, United States in 1839. He died on 6 June 1901, in Fairview, Rio Arriba, New Mexico, United States, at the age of 70, and was buried in Eagar Cemetery, Eagar, Apache, Arizona, United States.

The Horace Russell and Lydia Ann Hobson family, along with the Jacob Brewer and Sabra Ann Fillet family had moved together from Utah's Dixie (St. George area) to Arizona and settled in at Snowflake Ca …