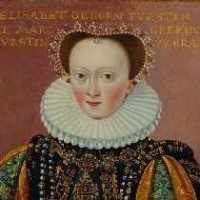 When Elisabeth von Anhalt-Zerbst was born on 25 September 1563, in Anhalt-Bitterfeld, Saxony-Anhalt, Germany, her father, Prinz Joachim Ernst von Anhalt-Zerbst, was 26 and her mother, Gräfin Agnes von Barby-Mühlingen, was 23. She married Johann Georg von Hohenzollern I, Elector Of Brandenburg on 2 November 1577, in Brandenburg, Heiligenbeil, East Prussia, Prussia, German Empire. They were the parents of at least 7 sons and 5 daughters. She died on 5 October 1607, in Saale-Holzland-Kreis, Thuringia, Germany, at the age of 44, and was buried in Berlin, Klein Bennebek, Schleswig-Flensburg, Schleswig-Holstein, Germany.