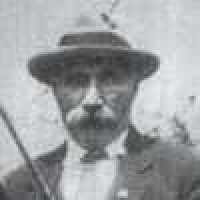 The Life of William George "Bill"

When William George "Bill" Anthony was born on 21 September 1863, in Seal Cove, Conception Bay South, Newfoundland and Labrador, Canada, his father, William Henry Anthony, was 28 and his mother, Bridgett Dawe, was 19. He married Clara Edith Harriman on 21 June 1894, in Berlin Falls, Coos, New Hampshire, United States. They were the parents of at least 7 sons and 4 daughters. He died on 26 February 1935, in Brownfield, Oxford, Maine, United States, at the age of 71, and was buried in Brownfield, Oxford, Maine, United States.

Put your face in a costume from William George "Bill"'s homelands.

"While attending the play ""Our American Cousin"" in Ford's Theatre, actor John Wilkes Booth climbed up the stairs to the suite that President Abraham Lincoln and his wife resided. Once inside the suite Booth pulled out his pistol and shot The President in the head. In critical condition The President was carried out of the theatre for urgent medical attention. Unfortunately, Lincoln died the following day. Abraham Lincoln was the first American president to be assassinated, and his death caused a period of national mourning both in the North and South."
1882 · The Chinese Exclusion Act