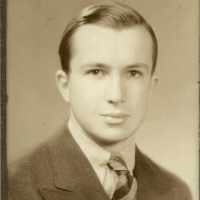 The Life of Jack Richard

When Jack Richard Andrews was born on 11 September 1920, in Superior, Douglas, Wisconsin, United States, his father, Wilford Andrews, was 25 and his mother, Juliet Anna Louise Klinkert, was 23. He married Virginia Catherine Schaller on 6 April 1943. He registered for military service in 1942. He died on 21 November 2008, in Eatonville, Pierce, Washington, United States, at the age of 88.

Put your face in a costume from Jack Richard's homelands.

The nation's first unemployment compensation law was passed in Wisconsin on January 28, 1932.
1944 · The G.I Bill