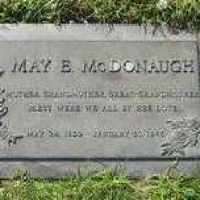 Learn about May Elizabeth's homeland.

Put your face in a costume from May Elizabeth's homelands.

Warrant G. Harding died of a heart attack in the Palace hotel in San Francisco.
1 North German and Dutch: topographic name for someone living on a corner.2 German: Americanized spelling of Hochmann ( see Hochman ).