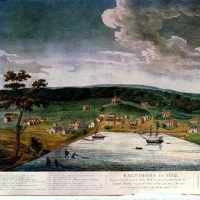 The Port of Baltimore was established in 1706 by the colonial General Assembly of the Providence of Maryland.

On July 30, 1729, the city of Baltimore was founded. The city was named after Lord Baltimore of the Irish House of Lords.

Nicholas Haile or Heale (sometimes spelled Hale), was the first immigrant from America and founder of the Hale family. The name Hale is probably of Welsh origin, being derived from “hal,” …