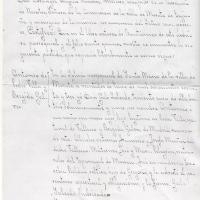 The Life of Antonio

Put your face in a costume from Antonio's homelands.

In September 1868 a mix of military and civil bandits dethroned queen Isabel II, starting a period of democratic rule.
1869 · Constitution of 1869

The constitution approved by the provisional government that took power after Queen Isabel II flees to France. It is the valid constitution used during the rein of King Amadeo I.
1892 · The birth of Catalonian politics

A proposal of Catalan constitution, called Bases de Manresa, was written in Catalonia, initiating the political movement of Catalanism, which is a movement that is relevant in present day.

1 Asturian-Leonese and Spanish: habitational name from any of the places (mainly in Asturies) called Villa, from villa ‘(outlying) farmstead’, ‘(dependent) settlement’, or from any of the numerous places named with this word as the first element.2 Italian: topographic name for someone who lived in a village as opposed to an isolated farmhouse, or in a town as opposed to the countryside, from Latin villa ‘country house’, ‘estate’, later used to denote of a group of houses forming a settlement, and in some dialects to denote the most important area or center of a settlement or a habitational name from any of various places named with this word.