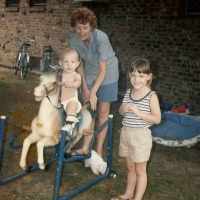 The Life of Freda Joyce

Put your face in a costume from Freda Joyce's homelands.

The Kentucky dam is a hydroelectric dam that spans the Tennessee River between Livingston and Marshall counties in Kentucky. It was completed August 30,1944.
1955 · The Civil Rights Movement Begins