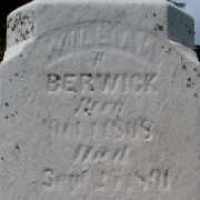 When William Henry Berwick was born on 1 October 1808, in Kingskettle, Fife, Scotland, United Kingdom, his father, Andrew Berwick, was 43 and his mother, Agnes Hynd, was 38. He had at least 4 sons and 1 daughter with Lydia M. Morgan. He died on 25 September 1891, in Berea, Cuyahoga, Ohio, United States, at the age of 82, and was buried in Woodvale Cemetery, Middleburg Heights, Cuyahoga, Ohio, United States.

The defeat of Napoleon Bonaparte at Waterloo marks the end of the Napoleonic Wars. Napoleon defeated and exiled to St. Helena.
1830

1 Scottish: habitational name from Berwick-on-Tweed, on the Northumbrian coast at the mouth of the Tweed river, a border town that regularly changed hands between the Scots and the English.2 English: variant of Barwick .