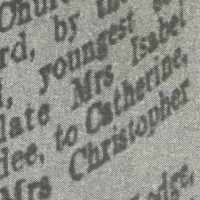 The Leith dockers strike was a strike that brought the town of Leith to a standstill after dock workers demanded an increase in pay, better working conditions, and shorter hours. The strike had an effect on the local community by not allowing trade to flow smoothly out of the docks. There totaled around 4,600 people a part of the strikes and riots but it ended near the middle of August with no demands met. since then two more strikes would happen at the same location, once in 1983 and, most recently, in 1989.
1914

Scottish: probably from an Old Norse personal name Liulfr, composed of an uncertain first element + úlfr ‘wolf’, although Reaney gives this as a pet form of Lyon or Lionel.