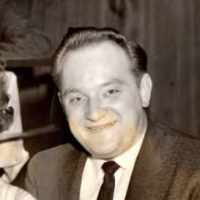 The Life of Robert Anthony

Put your face in a costume from Robert Anthony's homelands.

The Star-Spangled Banner is adopted as the national anthem.
1943 · The Detroit Race Riots

The 1943 Detroit Race Riot started on the evening of June 20 and lasted through June 22. It occurred in a period of dramatic social tensions associated with the military buildup of World War II, as Detroit's automotive industry was converted to the war effort. What fueled the fire the most was the arrival of nearly 400,000 migrants, both African-American and White Southerners, and the competition for space and jobs. It was suppressed after 6,000 federal troops were ordered into the city to restore peace. A total of 34 people were killed, 25 of them African-Americans and most at the hands of white police or National Guardsmen; 433 were wounded, 75 percent of them African-American.
1948 · The Beginning of the Cold War

1 Americanized form of Polish or Jewish Pelka .2 Altered form of French Pelletier ; these are frequent in VT.