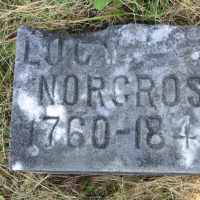 When Lucy Norcross was born on 1 June 1760, in Dublin, Cheshire, New Hampshire, United States, her father, Asa Norcross Sr, was 24 and her mother, Elizabeth Greenwood, was 19. She married Pvt Stephen Twitchell on 27 May 1779, in Dublin, Cheshire, New Hampshire, United States. They were the parents of at least 2 sons and 9 daughters. She died on 13 September 1845, in her hometown, at the age of 85, and was buried in North Windham Cemetery, Windham, Windham, Vermont, United States.