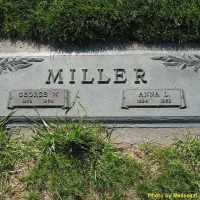 When George William Miller was born on 24 May 1879, in Holmesville, Central Huron, Huron, Ontario, Canada, his father, Joseph Wesley Miller, was 45 and his mother, Sarah Jane Graham, was 36. He married Anna Lenora Wilcox on 26 December 1904, in Gardner, Cass, North Dakota, United States. They were the parents of at least 6 sons and 5 daughters. He lived in Lewistown, Fergus, Montana, United States in 1930 and School District 1 Lewistown, Fergus, Montana, United States in 1940. He died on 11 June 1964, in Tacoma, Pierce, Washington, United States, at the age of 85, and was buried in Mountain View Memorial Park, Lakewood, Pierce, Washington, United States.