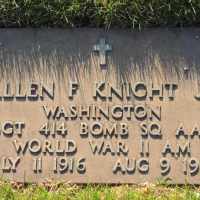 The Life of Allen Franklin

Put your face in a costume from Allen Franklin's homelands.

U.S. intervenes in World War I, rejects membership of League of Nations.
1917 · Fort Lewis is Established

Fort Lewis military base was established in 1917, in Tacoma, Washington. It was named after Meriwether Lewis of the Lewis and Clark Expedition. It used to be one of the largest and most modern military reservations in the US. In February 2010, it merged with McChord Air Force Base.
1929