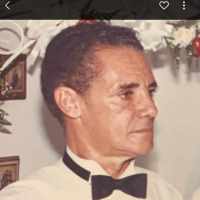 The Life of Milton Cristobal

When Milton Cristobal Suárez Gonzalez was born on 18 November 1929, in Panama City, Panama, Panama, Panama, his father, José Manuel Suárez Prieto, was 26 and his mother, Catalina de los Desamparados Gonzalez Gonzalez, was 24. He had at least 1 son. He died on 9 April 1996, in his hometown, at the age of 66.

Put your face in a costume from Milton Cristobal's homelands.

The Panama Defense Force(PDF) wins most of the seats in the Legislative Assembly with General Manuel Noriega at the head of the PDF.
1989

United States President George Bush orders the U.S. military into Panama. Noriega surrenders on December 27. Panama's Electoral Tribunal confirms the victory of Guillermo Endara in an earlier presidential election, the results of which had been declared invalid by Noriega.

There are no historical documents attached to Milton Cristobal.