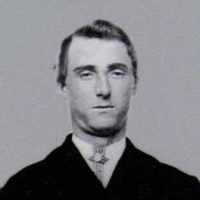 The Life Summary of James Nowlin

Put your face in a costume from James Nowlin's homelands.

Altered form of mainly northern French Ducastel: topographic name, with fused preposition and definite article du ‘from the’, from Picard castel, Old French chastel ‘castle’ (see Castel 5, compare 2 below); or a habitational name for someone from any of several places called Le Castel. Compare Castile .Dutch: from kasteel ‘castle’, hence a topographic name or a metonymic occupational name for someone who lived or worked in a castle.

Born in Pike, Illinois, USA on 1832 to Jacob Israel Casteel and Sarah Nowlin. James Nowlin married Marinda Bridget Weaver and had 3 children. He passed away on Jan 1888 in Nauvoo, Hancock, Illinois, U …