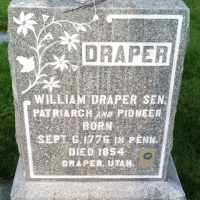 When William Draper was born on 6 September 1774, in Wyoming, Philadelphia, Pennsylvania, British Colonial America, his father, Thomas Draper II, was 34 and his mother, Lydia Rogers, was 23. He married Lydia Lathrop on 24 December 1794, in Rome, Oneida, New York, United States. They were the parents of at least 6 sons and 5 daughters. He died on 24 December 1854, in Draper, Salt Lake, Utah, United States, at the age of 80, and was buried in Draper City Cemetery, Draper, Salt Lake, Utah, United States.

English: occupational name for a maker and seller of woolen cloth, from Anglo-Norman draper (Old French drapier, an agent derivative of drap ‘cloth’). The surname was introduced to Ulster in the 17th century. Draperstown in County Londonderry was named for the London Company of Drapers, which was allocated the land in the early 17th century.

William Draper Sr. was born Sept. 6, 1774, the second son of Thomas and Lydia Rogers Draper, in Susquannah Co. Pennsylvania. (Another history records William as being born on September 9, 1774 in Lit …