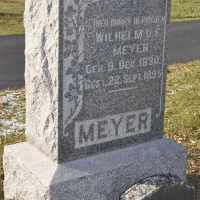 Put your face in a costume from Wilhelm O. F.'s homelands.

German and Swiss German: from Middle High German meier, a status name for a steward, bailiff, or overseer, which later came to be used also to denote a tenant farmer, which is normally the sense in the many compound surnames formed with this term as a second element. Originally it denoted a village headman (ultimately from Latin maior ‘greater, superior’). This form of the surname is also established in France (mainly Alsace and Lorraine); see also 3 below. Compare Maier , Mayer , Meier , and Myer .Jewish (Ashkenazic): from the Yiddish personal name Meyer, from Hebrew Meir ‘enlightener’, a derivative of or ‘light’ with the prefix m-. Compare Maier , Majer , Major , Mayer , Mayor , Meier , and Meir .Dutch: variant, also Flemish and Americanized, of Meijer , a cognate of 1 above. This surname is also established in South Africa, where it was also brought from France (see 1 above).