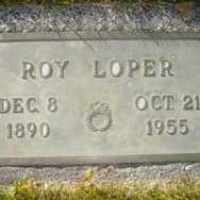 The Life of Roy

Dutch and North German (Löper): occupational name for a messenger or for someone who made excursions into the woods ( see Looper ).

https://www.findagrave.com/memorial/32800860/roy-loper Martha married Roy Loper and they moved to Klamath Falls, Oregon in the 1920's. They brought their three children Jim, Wayne and Esther. After a …