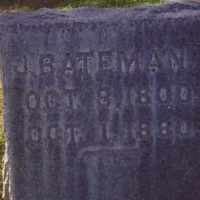 The Life Summary of Jeremiah

When Jeremiah Bateman was born on 8 October 1800, in Poplar, Middlesex, England, United Kingdom, his father, John Bateman, was 37 and his mother, Margaret Dunn, was 35. He married Mary Ann Baker on 23 June 1833, in Stepney, Middlesex, England, United Kingdom. He lived in Weber, Utah, United States in 1860. He died on 1 October 1880, in Contra Costa, California, United States, at the age of 79, and was buried in Antioch, Contra Costa, California, United States.

English: from the Middle English personal name Bateman, Bat(te)man, and in the West Midlands of England Batemon, a pet form of Bate or Batte with the hypocoristic suffix -man.