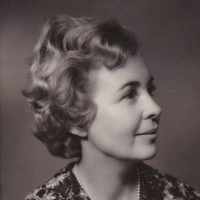 The Life of Hazel Mary

When Hazel Mary Kelly was born on 19 June 1921, in Dublin, Ireland, her father, Patrick Francis Dineen or Kelly, was 36 and her mother, Mary Charlotte Darling, was 26. She married Jacques Charles Lucien Montouroy on 20 February 1945, in York, Yorkshire, England, United Kingdom. They were the parents of at least 1 son. She died on 20 February 2010, in Le Vésinet, Yvelines, Île-de-France, France, at the age of 88.

Put your face in a costume from Hazel Mary's homelands.

Irish Civil War between the Free State army and IRA.
1924

Irish: Anglicized form of Gaelic Ó Ceallaigh ‘descendant of Ceallach’, an ancient Irish personal name, originally a byname meaning ‘bright-headed’, later understood as ‘frequenting churches’ (Irish ceall). There are several early Irish saints who bore this name. Kelly is now the most common of all Irish family names in Ireland.