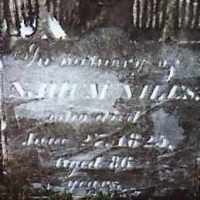 The Life of A. Nahum

When A. Nahum Niles was born on 15 October 1739, in Braintree, Norfolk, Massachusetts, United States, his father, Daniel Niles I, was 26 and his mother, Mercy Smith, was 28. He married Susanna Cole on 29 November 1759, in Bridgewater, Plymouth, Massachusetts Bay Colony, British Colonial America. They were the parents of at least 6 sons and 4 daughters. He died on 27 January 1825, in Lebanon Township, Wayne, Pennsylvania, United States, at the age of 85, and was buried in Smith Valley Cemetery, Lebanon, Lebanon, Madison, New York, United States.

Learn about A. Nahum's homeland.

Put your face in a costume from A. Nahum's homelands.

1 English: perhaps a patronymic from the medieval personal name Nel or Neal ( see Nelson ).2 Possibly a variant of German Neils , a derivative of the personal name Cornelius .