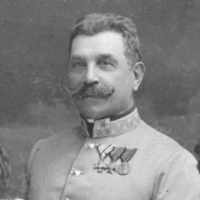 The Life of Ernst Rudolf Alexander

When Fmlt Ernst Rudolf Alexander Salomon von Friedberg was born on 27 May 1854, in Zolochev, Zolochiv Raion, Lviv, Ukraine, his father, Edmund Ambrosius Friedrich Salomon de Friedberg, was 40 and his mother, Anna Karolina Sofie Herbert, was 26. He married Aglaia Antonia Josefa Marie Hedwiga Lažanský z Bukové on 18 October 1890, in Hietzing, Vienna, Austria. They were the parents of at least 4 sons and 5 daughters. He died on 4 June 1945, in Litschau, Gmünd, Lower Austria, Austria, at the age of 91, and was buried in Zentralfriedhof, Vienna, Austria.

Put your face in a costume from Ernst Rudolf Alexander's homelands.

The Dual monarchy of Austria-Hungary is established.
1912

Jewish, German, Dutch, Danish, French, Spanish (Salomón), and Polish: the usual spelling in these languages of Solomon and a variant in others.