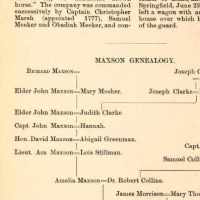 "The Pilgrims boarded the Mayflower in search of religious freedom in the New World in September 1620. The Mayflower set sail from Plymouth, England, with 102 passengers, 40 of whom called themselves ""Saints."" After two stormy months at sea, the ship reached the New World. Nearly half of the group died during their first winter due to malnutrition and the harsh New England winter."
1636

"Roger Williams and a group of religious followers founded the town of Providence in what is today known as Rhode Island after their banishment from the Massachusetts Bay Colony. Williams believed in the importance of liberty of conscience, which became an important principle in the founding of Rhode Island and ultimately in the founding of the United States. Officially called ""The State of Rhode Island and Providence Plantations,"" Rhode Island is one of the six New England states and one of the original 13 states of the Union, entering in 1790. It is the smallest state in area in the country."
1636

Rhode Island is where a permanent European settlement was founded, in 1636, by Roger Williams.

Richard and Rebecca are believed to have come to Boston in 1634 on board the ship "Griffin". Richard was a follower, and possibly a relative of the religious dissenter Anne Hutchinson who also came on …