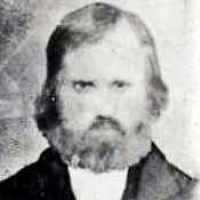 The Life Summary of Samuel C

When Samuel C McMurtry was born on 8 February 1797, in Greeneville, Greene, Tennessee, United States, his father, Joseph Patton McMurtry, was 34 and his mother, Mary Gragg, was 26. He married Julia Ann Morris from January 1833 to December 1833. They were the parents of at least 5 sons and 11 daughters. He lived in Weber, Utah, United States in 1860. He died in April 1873, in Oxford, Oneida, Idaho, United States, at the age of 76, and was buried in Oxford, Franklin, Idaho, United States.

Put your face in a costume from Samuel C's homelands.

(The 1860 Census shows that Samuel and Julia Ann McMurtrey had two children born in California in the 1850's. Zilla's death record says she was born in San Bernardino, California so this history is p …