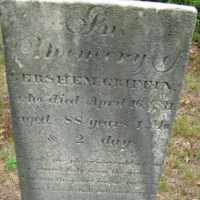 The Life of Gershom

When Gershom Griffin was born on 1 April 1755, in Dutchess, New York Colony, British Colonial America, his father, Edward Griffin, was 45 and his mother, Millicent Bishop, was 43. He married Sarah Briggs in September 1780, in Greene, New York, United States. They were the parents of at least 5 sons and 2 daughters. He died about March 1813, in New Baltimore, New Baltimore, Greene, New York, United States, at the age of 57.

Put your face in a costume from Gershom's homelands.