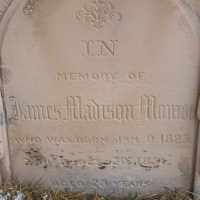 The Life Summary of James Madison

Scottish: variant of Munro .Irish: variant of Mulroy .History: Scottish bearers of this name are descended from Donald O’Kane, who in the 11th century migrated from the mouth of the Roe to Ferrindonald in Cromarty, Scotland. There his descendants, as barons of Foulis and vassals of the earls of Ross, held lands along the Firth of Cromarty. James Monroe (1758–1831), 5th president of the US (1817–25), came from a cadet branch of this family.