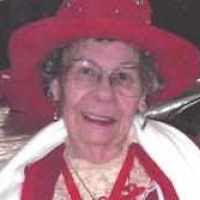 The Life of Jeanne Madaline

When Jeanne Madaline Bradshaw was born on 22 August 1926, in Omaha, Douglas, Nebraska, United States, her father, Merril Crary Bradshaw, was 35 and her mother, Josephine Amelia Chase, was 33. She had at least 1 son with Trueman Leonard Earl. She lived in Salt Lake City, Salt Lake, Utah, United States in 1930. She died on 25 April 2012, in Dallas, Texas, United States, at the age of 85, and was buried in Centerville, Davis, Utah, United States.

Put your face in a costume from Jeanne Madaline's homelands.

The Tower Theatre is a historic film theater operated by the Salt Lake Film Society. The theater presents independent films and is a venue for the Sundance Film Festival. It also presents classic films on occasional weekends and hosts a movie-rental library for those that want to expand their cinematic knowledge.
1949 · NATO is Established

English: habitational name from any of the places called Bradshaw, for example in Lancashire and West Yorkshire, from Old English brād ‘broad’ + sceaga ‘thicket’.