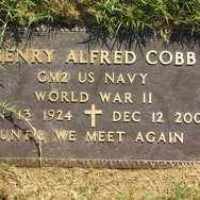 The Life of Henry Alfred

Put your face in a costume from Henry Alfred's homelands.

Many Native Americans from Oklahoma were once again employed as code talkers during WWII to create a code impenetrable by enemies. Rather than Choctaw, a Comanche-language code was developed. Several of these men were sent to invade Normandy to send messages. None of the men were killed and the Comanche code was never broken.
1947 · The Presidential Succession Act

English (mainly Dorset; also East Anglia):1. from the Middle English byname or personal name Cobbe, Cobba, or its Old Norse cognate Kobbi, which are probably from an element meaning ‘lump’, used to denote a large man. 2. from a reduced form of Jacob .