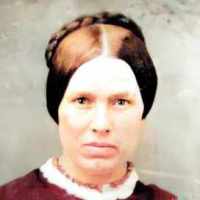 The Life Summary of Hannah Maria

Put your face in a costume from Hannah Maria's homelands.

English: habitational name from any of the many places called Newbury, named with the Old English elements nēowe ‘new’ + burh ‘fortress, fortified town’ (see Newbury ).English (of Norman origin): habitational name from Le Neubourg in Eure, France.History: Thomas Newberry emigrated from Devon, England, to Dorchester, MA, in 1634. Among his descendants were a number of very successful manufacturers and entrepreneurs, including the brothers Oliver (1789–1860) and Walter (1804–68) Newberry, whose prosperity was linked with the growth and development of Chicago.

from George Morris’ autobiography Sometime after I recovered [from an illness] I took a notion to get married again. [His first wife had died in childbirth; the baby girl lived only nine months.] …