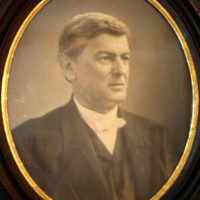 The Life Summary of Joseph Ruggles

Put your face in a costume from Joseph Ruggles's homelands.

Corfield vs Coryell was a significant federal court case that upheld New Jersey's existing regulation, which prohibited any non-residents from gathering clams and oysters. The case was decided by Justice Bushrod Washington of the U.S. District Court for the Eastern District of Pennsylvania. Justice Washington primarily referenced the first section of the Fourteenth Amendment, regarding "privileges and immunities" to arrive at his decision.