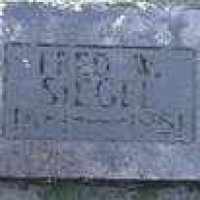 The Life of Frederick William

A federal law prohibiting all immigration of Chinese laborers. The Act was the first law to prevent all members of a national group from immigrating to the United States.
1885 · The First Skyscraper

The Home Insurance Building is considered to be the first skyscraper in the world. It was supported both inside and outside by steel and metal that were deemed fireproof and also it was reinforced with concrete. It originally had ten stories but in 1891 two more were added.
1900 · Gold for Cash!

1 German and Jewish (Ashkenazic): metonymic occupational name for a maker of seals or signet rings, or for an official in charge of a seal, from Middle High German sigel ‘seal’. The Jewish name can also be ornamental.2 German: from a medieval personal name, a pet form of the various Germanic personal names formed with sigi ‘victory’ as the first element, for example Siegfried .3 Jewish (Ashkenazic): variant of Segal .