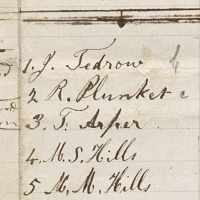 The Life Summary of William "Robert"

Put your face in a costume from William "Robert"'s homelands.

English and Irish (of Norman origin): habitational name from a metathesized form of Plouquenet in Ille-et-Villaine, Brittany, so named from Breton plou ‘parish’ (from Latin plebs ‘people’) + Guenec, the personal name (a diminutive of guen ‘white’) of a somewhat obscure saint. As an Irish name, it has been Gaelicized as Pluincéid.