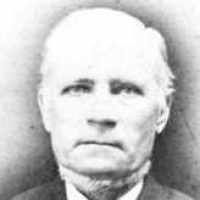 Dr. Johan August Ahmanson was born on 7 April 1827, in Småland, Sweden as the son of Nils Ahlberg and Johanna Ahman. He married Grethe Sophie Fjeldstad on 9 December 1853, in Copenhagen, Copenhagen, Denmark. They were the parents of at least 3 sons and 2 daughters. He immigrated to Utah, United States in 1856 and lived in Jönköping, Jönköping, Sweden in 1827. He died on 17 August 1891, in Omaha, Douglas, Nebraska, United States, at the age of 64, and was buried in Prospect Hill Cemetery, Omaha, Douglas, Nebraska, United States.

Older Scottish spelling of Joan , which was traditionally pronounced as two syllables.

Put your face in a costume from Johan August's homelands.