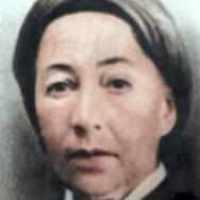 When Elizabeth Walmsley was born on 7 December 1816, in Thornley, Lancashire, England, United Kingdom, her father, William Walmsley, was 38 and her mother, Mary Slater, was 19. She married James Corbridge on 16 February 1835, in Chipping, Lancashire, England, United Kingdom. They were the parents of at least 3 sons and 1 daughter. She died on 13 April 1896, in Minersville, Beaver, Utah, United States, at the age of 79, and was buried in Minersville Cemetery, Minersville, Beaver, Utah, United States.

English (Lancashire): habitational name from Walmersley in Lancashire or Walmesley in Bolton le Moors (Lancashire). The surnames are distinct in the medieval period, because of the presence or absence of -r-, but impossible to separate thereafter. The placename is derived from an Old English personal name, Waldmēr or Walhmēr + Old English lēah ‘woodland clearing’.