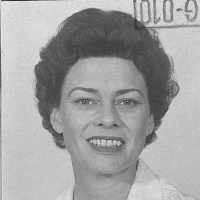 The Life of Bettie Virginia

Put your face in a costume from Bettie Virginia's homelands.

The Minnesota Woman was the name given to the skeletal remains of a woman thought to be 8,000 years old found near Pelican Rapids. The bones were brought to the University of Minnesota for more study. Later, Dr. Albert Jenks identified them as the bones of a 15 or 16 year old woman. Scientists now recognize the girl as someone whose ancestors were Paleo-Indian and now her skeletal remains have been reburied in South Dakota, not available for further study.
1941

English and Irish (of Norman origin): habitational name from Lassy in Calvados, named from a Gaulish personal name Lascius (of uncertain meaning) + the locative suffix -acum. The surname is widespread in Britain and Ireland, but most common in Nottinghamshire. In Ireland the family is associated particularly with County Limerick.

Death ended the long and bountiful career of OJ Lacy prominent Sacramento civic leader, at the age of 72 yesterday. Hospitalized for three weeks with a heart ailment, Lacy died at 7:10 PM in Sutter Ge …