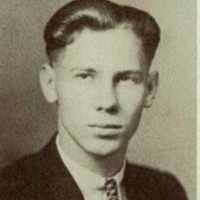 The Life Summary of Kenneth F.

Put your face in a costume from Kenneth F.'s homelands.

Women are given the right to vote under the Nineteenth Amendment.