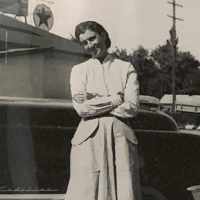 The Life of Grace Neola

Put your face in a costume from Grace Neola's homelands.

First woman to be admitted to business school

First woman to be admitted to business school