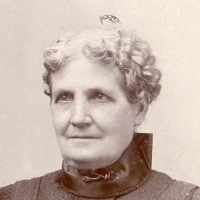 The Life Summary of Deborah

When Deborah Lees was born on 13 October 1782, in England, United Kingdom, her father, Samuel Lees, was 49 and her mother, Sarah Hyde, was 25. She married John Harrison Miller on 29 March 1807, in Ashton-under-Lyne, Lancashire, England, United Kingdom. They were the parents of at least 5 sons and 4 daughters. She lived in Highland Township, Franklin, Indiana, United States for about 10 years. She died on 1 May 1865, in Provo, Utah, Utah, United States, at the age of 82.

English and Scottish: topographic name from Middle English lees ‘fields, arable land’, plural of lee (see Lee ), or from Middle English lese ‘pasture, meadow’ (Old English lǣs).English: habitational name fromLeece or Lees in Lancashire, or Leese in Cheshire, all named from OldEnglish lēas ‘woodland clearings’ (plural oflēah), or from Leece in Cumbria, which was probably namedwith a Celtic word, lïss ‘hall, court, the principalhouse in a district’.English: variant of Leece 1.