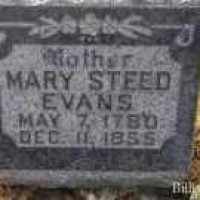 English (West Yorkshire and Lancashire):in Yorkshire and Lancashire, a habitational name primarily from Stead near Storiths in Hazlewood (Skipton, Yorkshire), which became a grange of Bolton Priory. Alternative origins might include Stead Farm in Nether Hoyland (Yorkshire), and Stidd in Ribchester (Lancashire), but it is not known if this latter produced a surviving hereditary surname. Across England, the name may arise from one or other minor places which were also named with Middle English stede ‘farm, estate; hamlet’ (Old English stede); for example, The Stude in Church Lawford (Warwickshire). The word was especially common in minor names and field names in south and southeastern England.variant of Steed .

Taken from Levi Richards 1799­1876 Some of His Ancestors and Descendants by Helen Richards Gardner, published by Unique Printing, Logan Utah 1973, available in the Family History Libraries at BYU and …