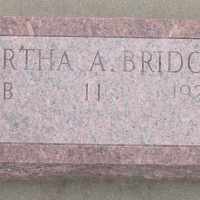 The Life of Martha Alene

When Martha Alene Bridges was born on 11 February 1923, in Howell Township, Howell, Missouri, United States, her father, James Allen "Albert" Bridges, was 37 and her mother, Mrs. Tennie Bridges, was 32. She married Floyd Elton Hellen on 18 April 1945, in Fulton, Arkansas, United States. They were the parents of at least 1 son. She died on 8 November 2010, in her hometown, at the age of 87, and was buried in Oak Lawn Cemetery, West Plains, Howell, Missouri, United States.

Put your face in a costume from Martha Alene's homelands.

English: variant of Bridge . The -s generally represents the genitive case, but may occasionally be a plural. In some cases this name denoted someone from the Flemish city of Bruges (Brugge), meaning ‘bridges’, which had extensive trading links with England in the Middle Ages.