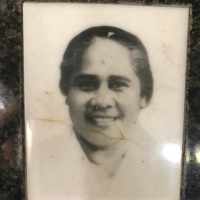 The Life of Tifitifi Mulitalo

When Tifitifi Mulitalo Liufau was born on 28 May 1906, in Aua, Maoputasi, Eastern, American Samoa, her father, Liufau Mulitalo Siaunuua Tuifakano, was 37 and her mother, Mulimauga Faua'a Satele, was 26. She married Uitime Fa'afili Fiame Sagapolutele on 6 January 1923. They were the parents of at least 4 sons and 6 daughters. She died on 18 December 1978, in Apia, Tuamasaga, Upolu, Samoa, at the age of 72.

Put your face in a costume from Tifitifi Mulitalo's homelands.

American Samoa is devestated by a hurricane. Olosega, in the Manua Islands, suffered the most. The Navy Department gave the Territory 50 tons of rice, 10 tons of salmon and 15 tons of biscuits.