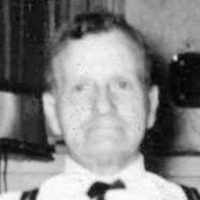 The Life of Richard John

Put your face in a costume from Richard John's homelands.

A federal law prohibiting all immigration of Chinese laborers. The Act was the first law to prevent all members of a national group from immigrating to the United States.
1890 · Welsh Industry Affected by U.S Tariff

In 1890, President McKinley and Congress passed the McKinley Tariff, which have had direct effect on Southern Wales. All foreign exports were taxed, including tinplates from the iron and copper mines in Wales.
1906 · Saving Food Labels