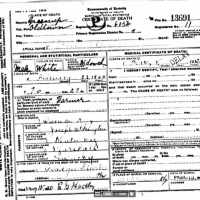 Possibly an English habitational name. However, no appropriate place name has been identified and the surname is not found in the U.K.