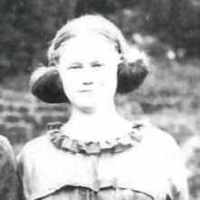 When Lydia Hilburn was born on 24 August 1900, in Missouri, United States, her father, Richard Hilburn, was 64 and her mother, Isabella, was 32. She married Samuel Isaac Pool in 1920. They were the parents of at least 1 son and 2 daughters. She died on 7 July 1941, at the age of 40, and was buried in Mansfield, Wright, Missouri, United States.

English: habitational name from a lost or unidentified place.