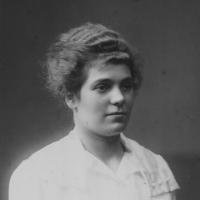 The Life of Geertruida Adriana

When Geertruida Adriana Tops was born on 18 September 1895, in Amsterdam, North Holland, Netherlands, her father, Petrus Joannes Tops, was 26 and her mother, Maria Gelens, was 26. She married Martinus Franciscus de Jong on 8 May 1919, in Amsterdam, North Holland, Netherlands. They were the parents of at least 2 sons and 1 daughter. She died on 3 February 1990, in her hometown, at the age of 94.

Put your face in a costume from Geertruida Adriana's homelands.

The Hague Peace Convention was a series conferences that produced treaties and declarations. The convention took place in Hague, Netherlands. The conferences were among the first formal statements of the laws of war and war crimes in secular international law.
1903 · Railroad strikes in the Netherlands (1903)

A labor dispute broke out among Amsterdam workers regarding union rights. Union membership was obligatory with certain companies, but this was not the case for some other employers. The strikes began in January of 1903 and quickly spread across the country. Workers fought for the right to organize into unions and have the freedom to implement strikes.
1922

Dutch women get the vote.

I was always impressed with Oma de Jong and her cooking when I was a child. She was very careful about how she did things, and while the food did not contain a lot of variety, it was very good. She se …