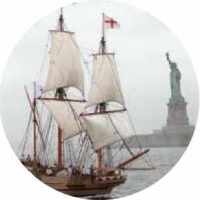 The Life of John George

When Capt. John George Overmeyer Jr. was born on 27 November 1727, in Blankenloch, Karlsruhe, Baden, Germany, his father, Johann Georg Obermayer, was 46 and his mother, Anna Bane, was 33. He married Maria Eva Magdalena Rosenbaum on 7 June 1754, in Dauphin, Pennsylvania, United States. They were the parents of at least 1 son and 3 daughters. He immigrated to Philadelphia, Philadelphia, Pennsylvania, British Colonial America in 1751. He died on 22 September 1805, at the age of 77.

The Declaration of Independence was signed in Philadelphia on July 4, 1776. The liberty bell was first rung here to Celebrate this important document.
1788 · The First Presidential Election

Variant of German Obermeyer . This is either a North German form or an Americanization.