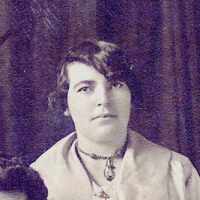 The Life of Jessie Elizabeth Emily

When Jessie Elizabeth Emily Rowney was born on 6 April 1900, in Hopetoun, Victoria, Australia, her father, Arthur Leonard Frederick Rowney, was 30 and her mother, Frances Clarissa Emily Mitchell, was 23. She married Robert James Roberts on 27 December 1927, in Tempy, Victoria, Australia. They were the parents of at least 6 sons and 1 daughter. She died on 11 April 1991, in her hometown, at the age of 91.

Put your face in a costume from Jessie Elizabeth Emily's homelands.

The Australian flag flown for the first time.
1939

There are no historical documents attached to Jessie Elizabeth Emily.