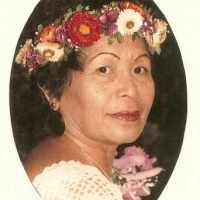 The Life of Gliceria A.

When Gliceria A. Amantiad was born on 3 May 1926, in Waialua, Oahu, Honolulu, Hawaii, United States, her father, Pedro Magsayo Amante or Amantiad, was 38 and her mother, Antonina Acol, was 24. She had at least 1 daughter with Alfred V Mendiha. She lived in Representative District 5, Honolulu, Hawaii Territory, United States in 1940. She died on 14 September 1999, in California, United States, at the age of 73.

Put your face in a costume from Gliceria A.'s homelands.