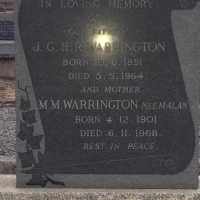 Put your face in a costume from James George Henry Robert's homelands.

British troops gather on the Transvaal border and ignore an ultimatum to disperse. The second Anglo-Boer War begins.
1913

Natives Land Act introduced to prevent blacks, except those living in Cape Province, from buying land outside reserves.

English: habitational name from a place of this name in Cheshire (formerly in Lancashire), probably named in Old English as Wæringtun ‘settlement by the weir’, from Old English wæring (not independently recorded), a derivative of wær ‘weir’. Another Warrington, in Buckinghamshire, which may also have given rise to the surname, is recorded in the 12th century as Wardintone, probably from an unattested personal name Wearda or Wǣrheard + -ing-, denoting association, + tūn ‘settlement’, ‘estate’.